The Company in a Nutshell 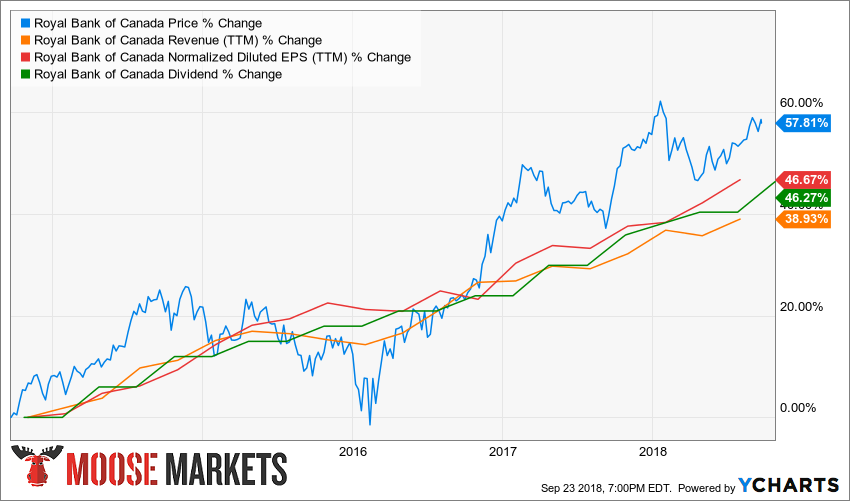 Royal Bank is the largest bank of the group by market cap (it battles with TD) and provides various financial services to individuals as well as commercial and institutional clients. RY has a strong position in the personal and commercial banking sector (50% of its revenue). In 2015, RY bought City National, a Los Angeles-based bank focused on high net worth clients. The transaction opened US doors and another growth vector: wealth management.

After the last market crash, the bank put its focus on growing its smaller sectors. While wealth management should continue to post stable income, the insurance and capital markets are more inclined to hectic returns. As the largest Canadian bank, Royal Bank could also get hurt by a bearish housing market

Over the past 5 years, RY did well because of its smaller divisions acting as growth vectors. The insurance, wealth management and capital markets push RY revenue. Those sectors combined now represent about 50% of its revenue. Royal bank also made huge efforts into diversifying its activities outside Canada. Canadian banks are protected by federal regulations, but this limits their growth. Having a foot outside of the country helps RY to reduce risk and to improve growth potential.

Get our Top 9 Stocks!

JOIN OUR WEEKLY NEWSLETTER AND GET THE BEST CANADIAN STOCK PICKS

Start Investing The Canadian Way with our BEST 9 STOCKS REPORT

JOIN OUR WEEKLY NEWSLETTER AND GET THE BEST CANADIAN STOCK PICKS