Canadian banks are amazing; they have outperformed the Canadian stock market for the past 5, 10, 15, probably 25 years. Unfortunately, they were not created equal. That’s a myth. Then, which Canadian Bank is the best? 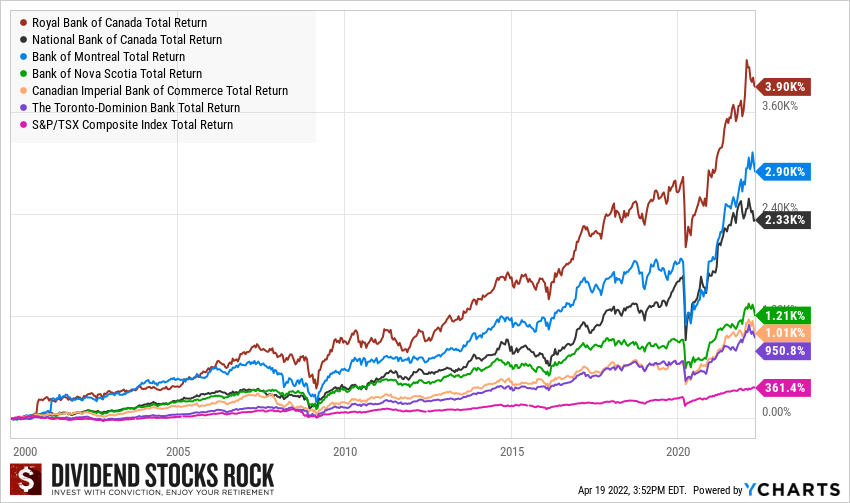 Since the 2008 financial crisis, each member of the big six (Royal Bank, TD Bank, ScotiaBank, Bank of Montreal, Canadian Imperial Bank of Commerce and National Bank), took a different direction.

They all benefitted from the oligopoly environment in Canada to fund new growth vectors. 14 years later, if you pick the wrong bank, you will be leaving a lot of money on the table.

Let’s take a look at our Canadian Bank Ranking from position 6 to 1.

BNS is the most international bank in the Canadian banking industry. It has significantly expanded its business outside of Canada with 40% of its assets outside the Canadian border. This hasn’t always been an advantage as BNS ran into its share of problems with South American economic struggles. The bank reduced its international footprint and has limited it to 30 countries currently, from 54 in 2013. Expected GDP growth for these countries is quite attractive (higher than Canada and the U.S.), but this comes with much uncertainty and volatility. BNS is now a dominant player in Chile with its most recent acquisition of BBVA Chile in 2018. The bank has a strong track record of acquiring and integrating businesses. The most recent quarterly results show an economic recovery across the Pacific Alliance, a lower provision for credit losses, growth in wealth management, but lower income in capital markets. 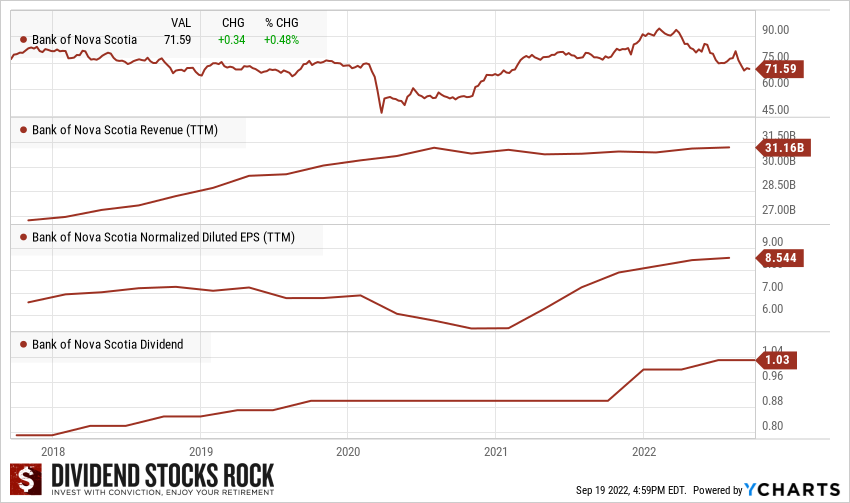 While CIBC lags behind the other banks on the stock market (along with ScotiaBank), it gives investors the opportunity to pick up a generous yield without significant risk. We like that they want to grow their wealth management division, but the integration of Private Bank will represent a crucial step. If an investor is looking for additional income, CM is probably one of the best picks on the Canadian stock market; it just can’t be expected to outperform the banking industry over the long run. CIBC is trading at a low PE ratio versus its peers since it has lower growth expectations. On the bright side, the dividend is not at risk, and an investor will enjoy consistent increases. CIBC will likely be a good fit for a retirement portfolio since it offers the stability of a top 5 Canadian bank with a decent yield and the security of future dividend growth. We must add that the bank has done very well in 2021 and its recent results pushed CM’s price to its highest price level in history. Let’s put it this way: it’s hard to perform poorly when you invest in a Canadian bank! 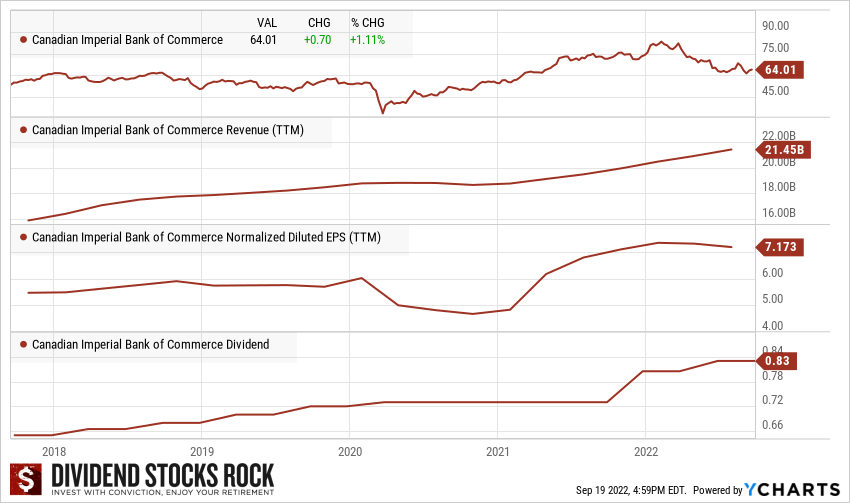 BMO decided to take the stock market path to ensure its growth. It was the first Canadian bank with its own ETF on the market. Competition is fierce but being among the first Canadian issuers surely helped to build momentum in a growing market. Over the years, BMO concentrated on developing its expertise in capital markets, wealth management, and the U.S. market. BMO also made innovative moves such as the introduction of its own ETFs and a robo-advisor. Growth will happen in these markets for banks in the coming years. BMO is well-positioned to surf this tailwind. Keep in mind BMO’s results are often more hectic compared to its peers due to its capital market business segment. The bank has been the less generous in terms of dividend growth between 2010 and 2020. However, it came back strong with the most generous dividend increase in 2021 (more on that in the dividend growth potential section). 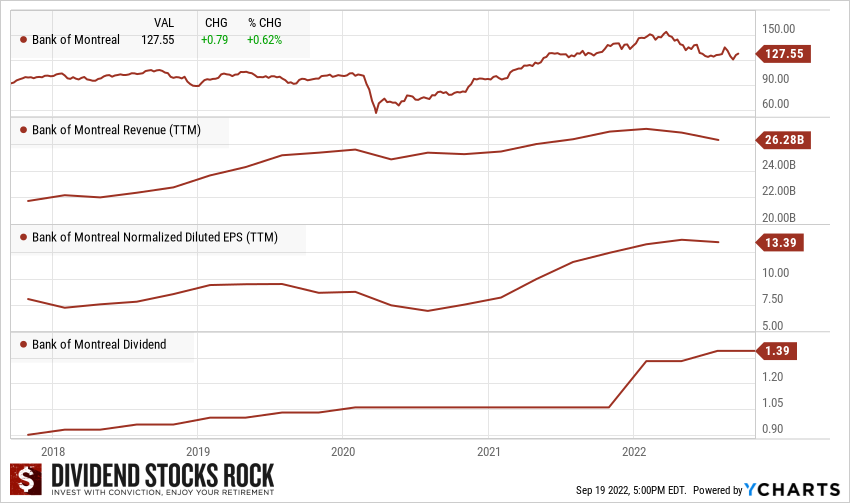 Over the years, the bank has been increasing its retail focus, driven by lower-risk businesses with stable, consistent earnings. The bank enjoys number one or two market share for most key products in the Canadian retail segment. TD keeps things clean and simple as the bulk of its income comes from personal and commercial banking. It has substantial exposure in major cities like Toronto, Vancouver, Edmonton, and Calgary, combined with a strong presence in the US. With about a third of its business coming from the U.S., TD is the most “American” bank you’ll find in Canada, with roughly 1/3 of its business coming from south of the border. If you are looking for an investment in a straightforward bank, TD should be your pick as increasing retail focus, large market share in Canadian banking, and U.S. expansion are key growth enablers for TD Bank. 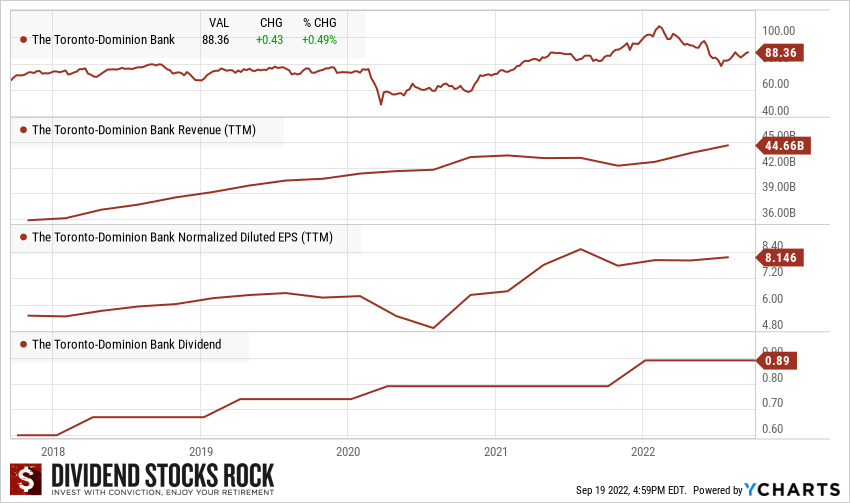 Royal Bank counts on many growth vectors: its insurance, wealth management, and capital markets divisions. These sectors combined now represent over 50% of its revenue. These are also the same segments that helped Royal Bank to stay the course during the pandemic. The company has made significant efforts in diversifying its activities outside of Canada and has a highly diversified revenue stream to offset interest rate headwinds. Canadian banks are protected by federal regulations, but this also limits their growth. Having some operations outside of the country helps RY to reduce risk and improve its growth potential. The bank posted impressive results for the latest quarters driven by strong volume growth and market share gains which offset the impact of low interest rates. As interest rates are expected to rise in 2022 and 2023, RY is in good position. Royal Bank exhibits a perfect balance between revenue growth. 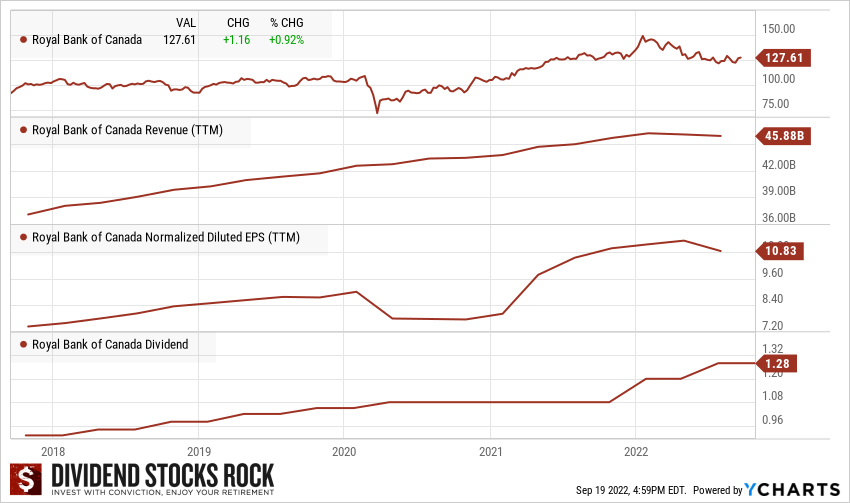 NA has targeted capital markets and wealth management to support its growth. Private Banking 1859 has become a serious player in that arena. The bank even opened private banking branches in Western Canada to capture additional growth. Since NA is heavily concentrated in Quebec, it concluded deals to do credit for investing and insurance firms under the Power Corp. (POW). The stock has outperformed the Big 5 for the past decade as it has shown strong results. National Bank has been more flexible and proactive in many growth areas such as capital markets and wealth management. Recently, NA is seeking additional growth vectors by investing in emerging markets such as Cambodia (ABA bank) and in the U.S. through Credigy. Can it have more success than BNS on international grounds? It looks like they may have found the magical formula to do so! 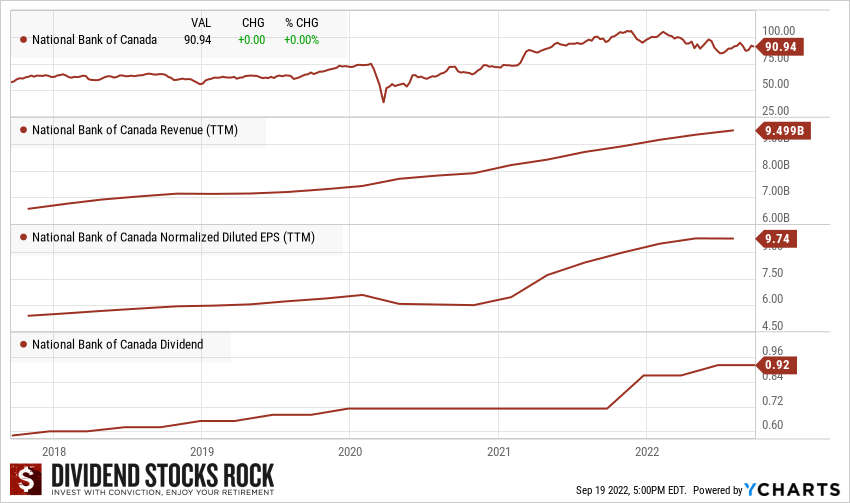 Canadian banks could be compared to the salt you use in your hearty fall soup. Some salt in it is making it tasty and great. Add too much salt and it is totally ruined. Act with the same caution for Canadian banks. Pick one or two, but don’t add too much in your portfolio!

Don’t you hate not knowing when to buy or sell stocks? There are too many investing articles contradicting one another. This creates confusion and leaves you with the impression you may not reach financial independence. It doesn’t have to be this way. We have created a free, recession-proof portfolio workbook that will give you the actionable tools you need to invest with confidence and reach financial freedom.

This workbook is a guide to help you achieve three things: